Eight prediction methods have been tested to filter transmembrane proteins, i.e. determining whether a sequence codes a transmembrane protein or a non-transmembrane one. These methods are Memsat, Octopus, Philius, Phobius, Pro-TMHMM, Scampi-single, Scampi-msa and TMHMM. They were executed on preprocessed sequences, i.e. after removing transit and/or signal peptides from the query sequences. As none of these method’s accuracies were as high as desired, a simple consensus approach were utilized to increase the prediction accuracy.

We have prepared a figure by combining the results in a Venn diagram of methods with Matthews correlation coefficients above 0.93, as well as a table showing the results of all triplet combinations of the selected four methods.

Venn diagram of the filtering accuracies 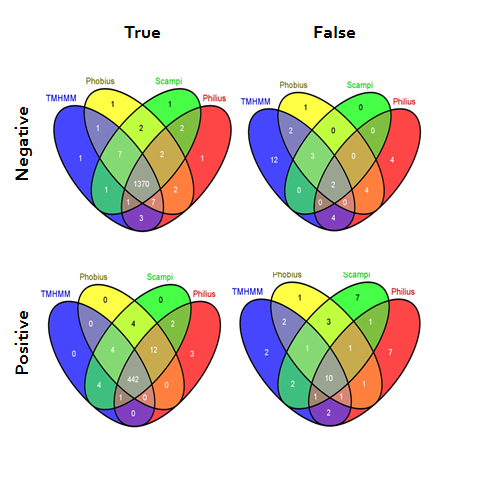 
As it expected, and can be seen from these data, combining the various algorithms decreases the false negative (FN) and false positive (FP) ratios. However, the true positive (TP) ratio decreases as well. Therefore, there should be an optimal number of the combined methods. Using a simple majority decision algorithm for three methods out of the selected four ones, the highest accuracy could be reached if the three methods were TMHMM, Scampi and Phobius.